Even with all of the gadgets, gizmos and tools you just have to have out there sometimes, you can’t find just what you need and you have to make your own. I’ve seen artists use everything from pool noodles to pipes as they support their work in the wet building stages, but my work needed support in the kiln, which means I needed something that could survive the firing process.

I’ve been firing flanged pieces from my bone series with some good results but I often get a small crack line along the length of the pieces during the glaze firing process. I realized that some more support might be what’s needed to help them survive the firing process with a higher success rate. So I started building some angled clay shapes for the sculptures to rest on. But because the glaze can’t touch anything during the firing, I added short lengths of heavy gauge nichrome wire pins poking out of the clay everywhere. So the glazed piece rests on the pinpoints instead of on the clay support. The result looks like some crazy torture device but so far so good, my new tool appears to have worked its magic. Making the tools to make the art makes artists inventors as well as creators! 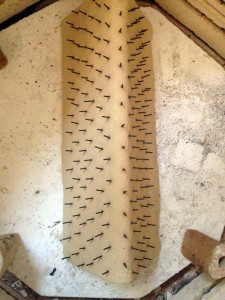 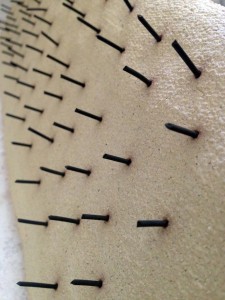 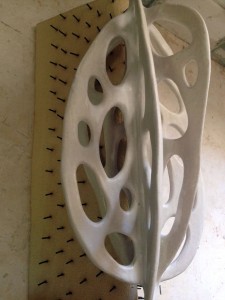