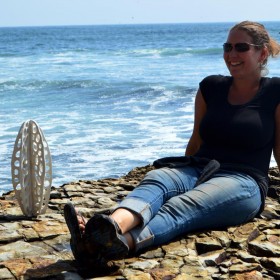 Lots of artists, writers and performers talk about their so-called muse. I used to think that if you didn’t have the muse, you couldn’t make the art, as if some permission needed to be granted from a higher power. I kept expecting to get struck with a lightning bolt of creative energy… and it wasn’t happening.

In an interview with Elizabeth Gilbert, Tom Waits talks about his muse, One day he was driving down the freeway in Los Angeles he told me, and this is when it all changed for him. And he’s speeding along, and all of a sudden he hears this little fragment of melody, that comes into his head as inspiration often comes, elusive and tantalizing, and he wants it, you know, it’s gorgeous, and he longs for it, but he has no way to get it. He doesn’t have a piece of paper, he doesn’t have a pencil, he doesn’t have a tape recorder.

So he starts to feel all of that old anxiety start to rise in him like, “I’m going to lose this thing, and then I’m going to be haunted by this song forever. I’m not good enough, and I can’t do it.” And instead of panicking, he just stopped.

He just stopped that whole mental process and he did something completely novel. He just looked up at the sky, and he said, “Excuse me, can you not see that I’m driving? Do I look like I can write down a song right now? If you really want to exist, come back at a more opportune moment when I can take care of you. Otherwise, go bother somebody else today. Go bother Leonard Cohen.”

I love this story because I imagine being in traffic, in the car next to Tom Waits while he’s screaming to the sky and wondering who this lunatic? All the while not realizing that this is what it takes to give birth to Tom Waits lyrics. People always ask me, “Where do you get your ideas? Do you have crazy dreams?” While I have definitely solved artistic problems in my sleep, I’m certain that I’ve never been struck with an idea from an mystical force. I don’t have the muse keeping me company and yet I’ve continued to make art. I open up my studio and build, some things are successful and some never even make it into the kiln, but I keep building, and I can’t imagine that not being my job.

The artist Kiki Smith was quoted as saying, “I think a lot of making art is listening to yourself.” and I couldn’t agree more. So what fuels me, if not the muse? Maybe it’s as simple as paying attention to the little things going on around me, getting excited about those little things and wanting to share them in my own voice to others.