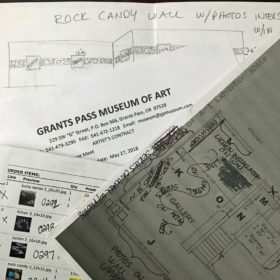 As a working artist, I wear many, many hats. One of them is making art- that’s my favorite hat but this week I haven’t been wearing that hat very much. Not because I don’t want to or because I’m not inspired to make things, but because as a working artist, there’s just a lot more to the job.

I’ve been preparing for a solo show at the Grants Pass Museum of Art in Grants Pass Oregon which opens the beginning of April. It’s a really big deal to get a solo show, and it’s an even bigger deal to get a solo show in a museum. There is so much planning that goes into making a successful show. There is the theme of the show you want to present, the space you need to fill, the coordination of it all, the three million other tiny details that really, really matter- oh! and you need to have the work, lots of it.

Want to know how I get my sh*t together and keep it together while I go through this process? In a single word, lists. I have lots and lots of lists. Some of my lists are your standard to-do items, but some take the form of sketches with arrows, notes and question marks. Other times my lists are inventory numbers, file names and contracts but almost all are hardcopy, actual papers that I can hold and flip through to see my thoughts. Having this pile of papers may seem disorganized but for me its a way to track my process as I tackle a project like putting together a solo show. It’s a way of making sure I’ve considered the options, even if I’ve decided to dismiss them. At the end of the day, I can take a look at my lists, see what I’ve accomplished, see what needs to be done and (most of the time) I can go to sleep knowing that I’ve got my sh*t together.

Today, the studio is very cold and the idea of working with wet clay is less than appealing so instead I’m wearing my blog writer hat while cooped up in my office with the heater buzzing working on crossing things off the lists. Also, I know many of you won’t get to see this show in person, so I’ll be posting details about my installation plans, the progress of putting up the show as it happens and I’ll share images of it finished with you -promise- it’s on the list!

Spread the love
Category: the dirt
Tag: Life In The Studio
Leave a Reply Cancel reply